Odyssey School’s music program is offered for classes for PreK-12th grade students weekly and includes multiple opportunities for students to expand their playing and appreciation. Lead music teachers River Guerguerian and Agustin Federic explore what it means to listen — physically, emotionally, spiritually and how sound enriches our lives. A short presentation video from years ago remains relevant: Watch here!

The classroom, which doubles as a professional full recording studio, complete with sound proofing and state-of-the-art production equipment, is a creative workshop space containing instruments from musical cultures from around the world. The teaching approach is one of self exploration and the universal language of sound, where Odyssey students are encouraged to break free from shyness and into musical relationship. Community celebrations and student performances at Odyssey: 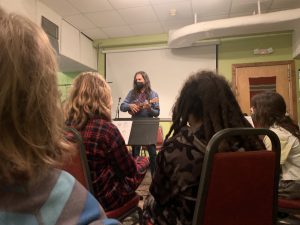 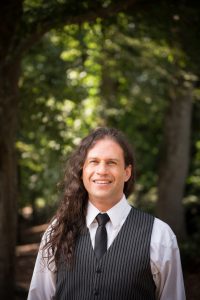 Agustín is a national and international musical artist born in San Jose, Costa Rica. He earned a degree in Music & Social Behavioral Sciences from the University of Central Florida (UCF), and later attended Florida State University for Jazz Studies. He has been a Qualified Professional in North Carolina and has over 20 years of experience working with the IDD (Intellectual and Developmental Disabilities) community.

As a drummer and percussionist he performs, tours, and is a recording artist with his bands.  Agustin is currently featured in the original rock band ExciterBox, who have a newly released album. He plays with Zabumba, a Brazilian drumline and dance troupe based in Asheville, NC. Some past ensembles include the 1995 Madison Scouts Drum & Bugle Corps and Walt Disney World (3 ensembles). He has also played in several orchestras/symphonies, concert bands, percussion ensembles, steel drum bands, jazz bands, marching bands, percussion for theater productions and many pop/rock bands.

Since 2021, he has been the music teacher at the Odyssey School in Asheville NC for pre-kindergarten through high school students. He is a resident teaching artist at LEAF Global Arts (Schools & Streets program) in Asheville, NC. His music pedagogy work has included Winter Park and Trinity high schools in Florida, The Austin Waldorf School in Texas, and as a percussion master class clinician at festivals and conventions. He arranged and composed for Appalachian State University, UCF, Wake Forest, and high schools. 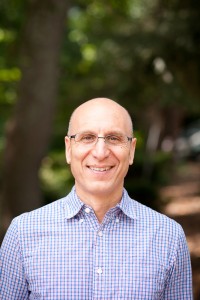 River Guerguerian has been inspiring audiences with his ecstatic and versatile percussion for over 30 years. Whether collaborating with world-class artists, supporting symphonies or creating his own dynamic explorations of rhythm, River’s devotion and attention to the vibrant life of the drum reverberate through the mind and soul of the listener.

River was born in Montreal to Armenian/Middle Eastern parents and began his journey into music in 1974. He received a Bachelor of Music degree from The Manhattan School of Music Conservatory in 1989 and was granted the school’s award for Most Outstanding Percussionist.

In 1988 he began working with Grammy and Oscar-winning composer, Tan Dun. Over the next several years he continued performing with several artists, which placed him in the prestigious concert halls of most major cities of the world, including Carnegie Hall, The Sydney Opera House and Lincoln Center.

In 1994, River decided to sell all of his possessions and step off of the grid. He resided in a wildlife sanctuary in the Himalayas. The adventure lasted for five years and led to his immersion into extensive nature-inspired research and experimentation into the physiological effects of sound upon brainwave states. He continued his investigation of trance-inducing instrumentation as he further explored the East, closely observing the distinctive techniques of several cultures.

Drawing upon his richly diverse experiences, River plays across a remarkable span of musical genres and traditions, both obscure and mainstream. His patient research and unrelenting passion have allowed him to develop a personal and masterful sound from Old World frame drums, Middle Eastern, Indian, Western, African and Afro-Cuban percussion instruments and more. His compositions have been commissioned for and performed by chamber ensembles, universities, modern dance companies, and international music festivals.

As a highly regarded studio musician, River has recorded on over 300 albums and film soundtracks, including the John Cage documentary film, “I Have Nothing to Say and I Am Saying It.” Over the span of his prolific career, he has performed and/ or recorded with such groups as the BBC Symphony Orchestra, New Music Consort, Omar Faruk Tekbilek, Tibetan Singing Bowl Ensemble, Paul Winter Consort, Talujon Percussion Ensemble, Lizz Wright, Chuck Berry, Sophie B. Hawkins, and Ziggy Marley and The Gipsy Kings. He often engineers his own percussion tracks for artists at his recording studio.

A respected music educator, River is Music Director of the Odyssey Community School. He also conducts “rhythm and sound exploration” workshops throughout the country, and enjoys teaching privately. You can hear his lyrical style with his world jazz trio Free Planet Radio, and other ensembles his curates.

Since 1999, River has lived in the beautiful mountains of Asheville. River is the Artistic Director of Asheville Rhythm, which hosts weekly/monthly classes and produces the Asheville Percussion Festival, now in it’s tenth year; a down-home and world class experience that summons people from near and far to fellowship, study, and be renewed in their practice and lives.

Happiness is exploring your surroundings! @odyssey

@odysseyschoolavl learning is fun. Whether through

Did you know that Odyssey’s mascot is an owl? We

Our HS minimester is in full swing. Pictured is B

So happy to be back @odysseyschoolavl