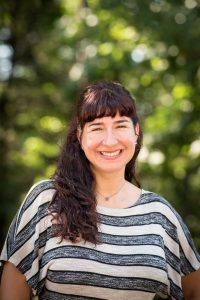 Karina is a native Spanish speaker from Santiago, Chile. She has been living in North Carolina since 2009 and became a US citizen in 2016. She studied at Universidad Nacional Andrés Bello in Chile and graduated with a Bachelor’s Degree in Education. Karina taught elementary and middle school for 8 years in Santiago before moving to the United States. In addition to teaching, Karina also was a private tutor for students with academic support needs and was also involved with many social and community outreach programs in her native Chile.

Since coming to the United States, Karina has continued her passion for Education by teaching the Spanish language and culture to students from ages 3 to 65 years old. She teaches private lessons and also taught in a middle school preparing students for advanced High School credits. Karina was also responsible for leading student trips each year to a bilingual school in Heredia, Costa Rica, sharing information and ideas with educational professionals from there.

In her free time, she loves spending time with her husband, two daughters, and dogs. Biking, hiking, exploring nature, dancing, cooking, and traveling are her favorite hobbies.

Gabriel Johnson completed a B.F.A in Literature at UNC-A in 2001. As a young man, Gabe pursued his love of literature in the form of songwriting, by founding and performing in several bands and musical projects here in the US, and also in Dublin, Ireland where he lived after college. As a teacher, Gabe believes that learning control of language is essential for navigating the modern world. He also believes that learning to appreciate literature is one of the most rewarding endeavors a person can pursue.

When he’s not reading, Gabe loves playing card and board games, hiking, playing guitar, biking, and gardening. He is especially excited to be a part of the Odyssey community, connecting with the students, staff and parents of this exceptional institution, and has been teaching at Odyssey School since 2012.

Andrew Rabin has lived in Asheville since 2014, and he has been a high school science teacher since 2001. In previous career incarnations, he was a wildlife biologist studying owls in the desert southwest, an assistant director of an environmental education camp for NY city public school kids, and the head chef of a French restaurant in Tucson, Arizona. Andrew attended Earlham College for an undergraduate degree in Biology, Prescott College in Arizona for his teaching licence, and has a Masters of Ecological Teaching and Learning from Lesley University in Massachusetts. He is a lifelong learner and is passionate about science as a means of understanding the world around us. While teaching in Boston, Andrew created a democratic science classroom as part of an action research project for his Masters degree.

Andrew’s two kids also attend Odyssey’s elementary and middle school. His interests include, bird watching, cycling, playing the banjo, gardening, Magic the Gathering and playing Ultimate Frisbee. He is the proud owner of a pair of eighteen year old Ball Pythons. Andrew has visited and/or lived in 45 different states, but is very happy to call Asheville and Odyssey home.

Growing up in the mountains of eastern Tennessee, Grant Yost has always had an affinity for being outside. He attended college at the University of Tennessee at Chattanooga on the Tennessee River, where he graduated from the Honors College with a B.S. in Applied Mathematics and a focus in STEM Education. While at UTC, Grant did research in the field of Fractional Calculus with the Mathematics department and has two papers published in his name on the topic of Fractional Differential Equations. Grant is entering his fourth year teaching Mathematics at Odyssey and his first year as HS Curriculum Coordinator.

Because of his experiences with Mathematics, Grant has a deep appreciation for logic, puzzles, and the thought processes that people use to solve problems. As a teacher, he believes that every student should be well equipped to tackle any problem that he or she is faced with in life. He teaches using many tasks, puzzles, and scenarios that require students to collaborate, think logically about the situation, and discover a solution. Grant believes it is the teacher’s duty to be actively guiding and facilitating student learning while supporting independent discovery. His classroom is a supportive environment where everybody is engaged in asking questions, exploring solution methods, and enjoying the challenge of Mathematics.

Outside of the classroom, Grant spends his time playing music, climbing, dancing, hiking, playing video games, and playing board games. Grant is actively involved in Asheville’s contra, swing, and blues dancing communities as a musician, teacher, and dancer.

Hadley’s intellectual passions lie in the rich borderlands of history, science and society.  They earned two Bachelor’s degrees (simultaneously) from The Ohio State University: one in the Comparative Studies of Science and Technology (basically the history, philosophy and sociology of science and technology) and the other in Spanish, with a focus on Latin American Literature and Language.  They went on to earn a Master’s degree in History from Appalachian State University, where her thesis was a deep dive into the history of science in Latin America. Hadley’s work on the history of science in Latin America has been published in the peer-reviewed academic journal The History Teacher.  Hadley strives towards decolonizing the history classroom by highlighting diverse and often overlooked histories, as well as by engaging students in challenging and valuable discussions. In addition to being an historian and a perpetual learner, Hadley is also a mother, maker, motorcyclist, metalhead, gardener and nerd.

Clayton Hufford completed a B.F.A in Graphic Design from Bowling Green State University and an M.F.A. in Glass Sculpture from Rochester Institute of Technology. After receiving his undergraduate degree, Clayton taught glassblowing at a summer camp for high schoolers in Williamsburg, MA, and then moved to take classes and teach at Penland School of Crafts before finishing his masters. In his work at Odyssey, Clayton marries his training in art, design, and sculpture with his on-the-ground experience as a woodworker and renovator.

At Odyssey we stay ready—ready to be and show ou

Double your gift and help make our first Giving Tu

Today at our monthly buddy lunch we created a grat

If you are feeling eager and inspired to support O

Check out these fifth and sixth graders exploring